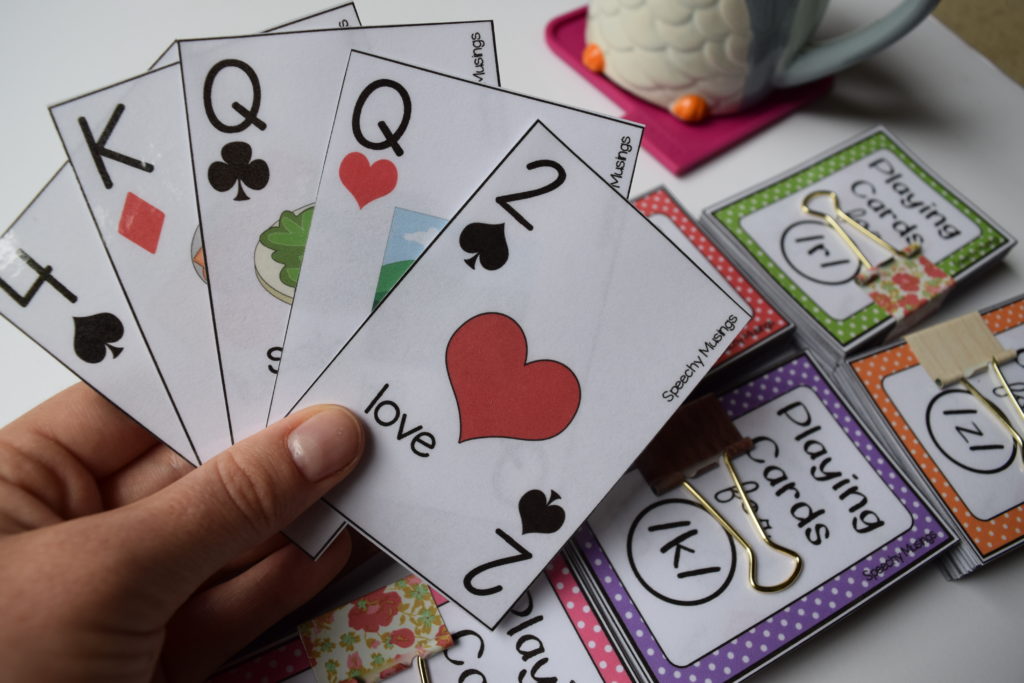 Ever wish you could play card games in speech while targeting articulation skills? Now you can!

I made these versatile articulation playing card decks so you can play games like Go Fish, War, Crazy Eights, or even Memory – all with one deck! These cards are so versatile, you can even use them like normal flashcards. I’ve put them in sensory bins, hidden them for scavenger hunts, or just drilled articulation sounds with them.

Every deck contains 52 picture cards (obviously) and targets each sound in the initial, medial, and final positions.

For each deck, the diamond cards target initial sounds, the clubs target medial sounds, and the hearts target final sounds. The spade cards are mixed and include the sounds in a variety of positions!

For the /r/ deck, I’ve included cards for prevocalic r, ar, ear, air, ire, or, er, rl, and r blends which are fairly mixed up within the suits. 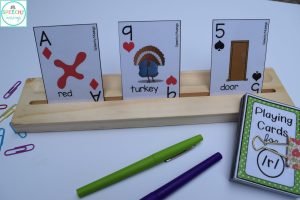 In addition, each deck comes with a nice cover that you can use to label your decks of cards! 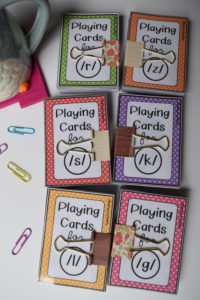 My favorite game to play with these cards is War. If you don’t know how to play, you divide the deck evenly between all players. Each player flips over the top card of the deck at the same time. Whoever flips the highest number wins all of the cards. If you run out of cards, you’re out! Whoever has the most cards at the end of the session wins! I love it because you can play for 5 minutes or 30 minutes and the turns are fast meaning you get A TON of drill in! It’s also super easy to learn! For students at the sentence level, I have them make a sentence using both cards during War. For example, for the picture below they could say “The radio is in my office”. 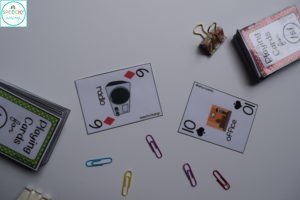 Interested in buying these cards? Here’s some more information!

I currently have decks for the following sounds: s, z, l, r, g, and k. I hope to add other sounds in the future. You can buy each sound individually or buy a bundle of all of the sounds and save 20%. Click here or click the picture below to check out the bundle. From there you can click around to see each individual deck if you only need 1 or a couple of sounds. 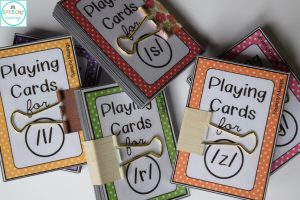 « The Summer Version of Me!