Using SuperFight the Game in Speech and Language Therapy

Superfight the game has been a big addition to my secondary speech therapy for middle schoolers.

Oh middle school… There is so much distrust at this age, especially at the beginning of the school year. So many of my students don’t want to come, get embarrassed, or are just “over” speech by this age.

I don’t give out prizes or use tons of sticker or reward charts at this age either. I kind of expect my students to come and do the planned activity just like they do in their other classes.

BUT, at the beginning of the school year I work hard to establish a relationship and get all of my students excited and looking forwards to speech. One game I discovered this school year was Superfight the game. My students have gotten SO into it! Because of this, I’ve come up with quite a few ideas of how to incorporate the game to target a variety of speech and language goals. 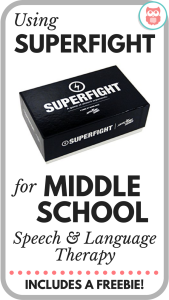 First things first… how to play! To be honest, I’m not 100% sure of the real directions. I think I play close to the real way but I can’t guarantee this is how the instruction manual would recommend. 😉 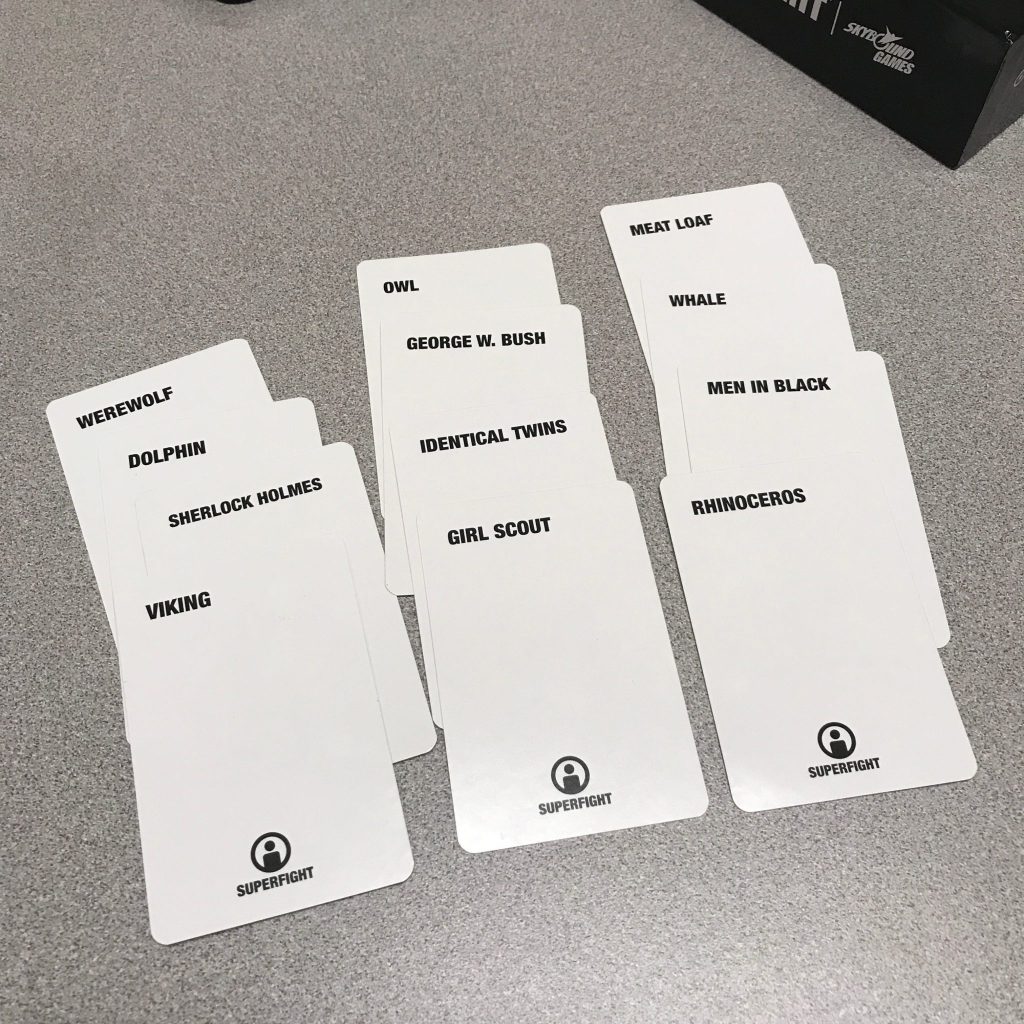 The black cards each have a superpower. 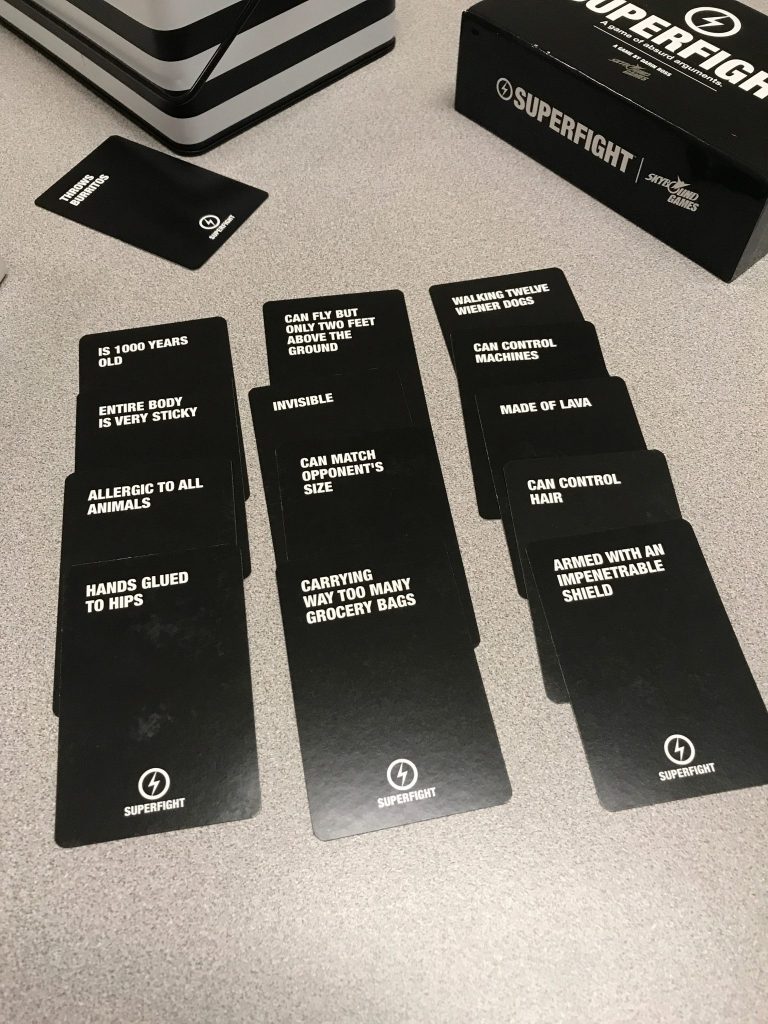 For most groups, I have them fill out this writing sheet for the first round. It’s great to see what their writing skills are like! 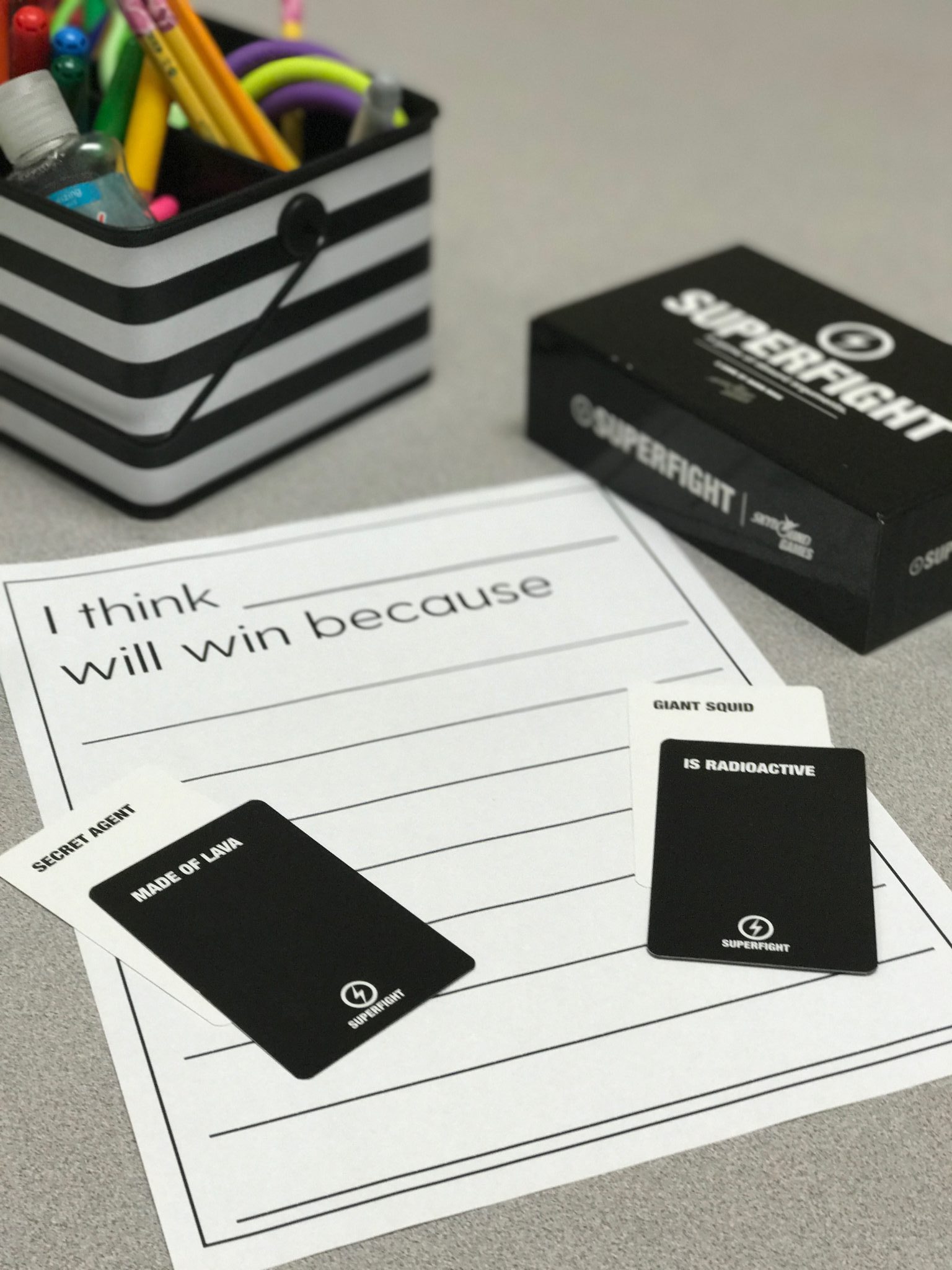 There’s a million ways to use this game. It naturally lends itself well to all things expressive language because it is incredibly difficult to explain why your superhero, Hillary Clinton who can throw burritos, is better than somebody else’s superhero, a viking that can fly but only 2 feet off the ground.

My students laugh SO hard when we play this game! They truly love it. I’ve won over 4 students that have historically refused to come to speech (or at least demonstrated major resistance to coming) with this game. You need it.

For one student, I gave him several cards. He picked his favorite and is writing a funny novel with that character about how he discovered his super power (lives in a large, glass hamster ball). It’s hilarious, engaging, motivating, and has gotten more writing, planning, and editing out of this kid than anything else this school year.

For another student, I have him practice fluency strategies in a more high pressure, realistic situation.

Same goes for my articulation students. Do you have students that are 90-100% accurate in structured settings but have trouble carrying over when they aren’t thinking about it? This game is fast paced and requires quick thinking! I’ve caught several of my students slipping up during this game when I had trouble eliciting errors in a pull out setting before. Bonus: There’s a TON of /r/s in the people’s names and in their superpowers. I’d say 75% of the cards contain /r/!!

Another unexpected surprise is that there is so much world knowledge built into this game that many of my students are missing. I had 2 students ask me if “giant squids” were real or not. Many of my students didn’t know what sasquatch was. It’s been so much fun to Google these topics of interest! My students are amazed about the things they are learning about!

For several students on my caseload, we’re working on writing complex sentences about our characters. Imagine writing sentences containing if and then. “If my character threw a burrito at yours, they’d be too slow to get out of the way in time!” It’s incredible what your students will come up with!

Sometimes, we’re having so much fun, we even forget to pick a winner. I assign each student a number. At the end, everybody holds up a number of fingers to vote for another person (they cannot vote for themselves). I vote too! Whoever gets the most votes wins!

The SUPER fun part about this game is the creativity. Some of the cards are hilarious!

Warning: With all this creativity and fun comes one downside – many of the cards, in my opinion, are inappropriate for a school setting. I pulled out about 1/4 of the cards due to violent/inappropriate themes. Or things my students wouldn’t know.

I got Superfight the game on Amazon. Below is an affiliate link if you’re interested in checking it out!

It’s been a lifesaver during the last month or so. It’s definitely in my top 3 middle school SLP games… might be #1… only time will tell.

PS: I see 5th and 6th graders in case you’re looking for a grade level idea.

I hope your students LOVE Superfight the game! Gotta love those upper grades <3

PS: If I were a real life superhero, this would DEFINITELY be my superpower 😉 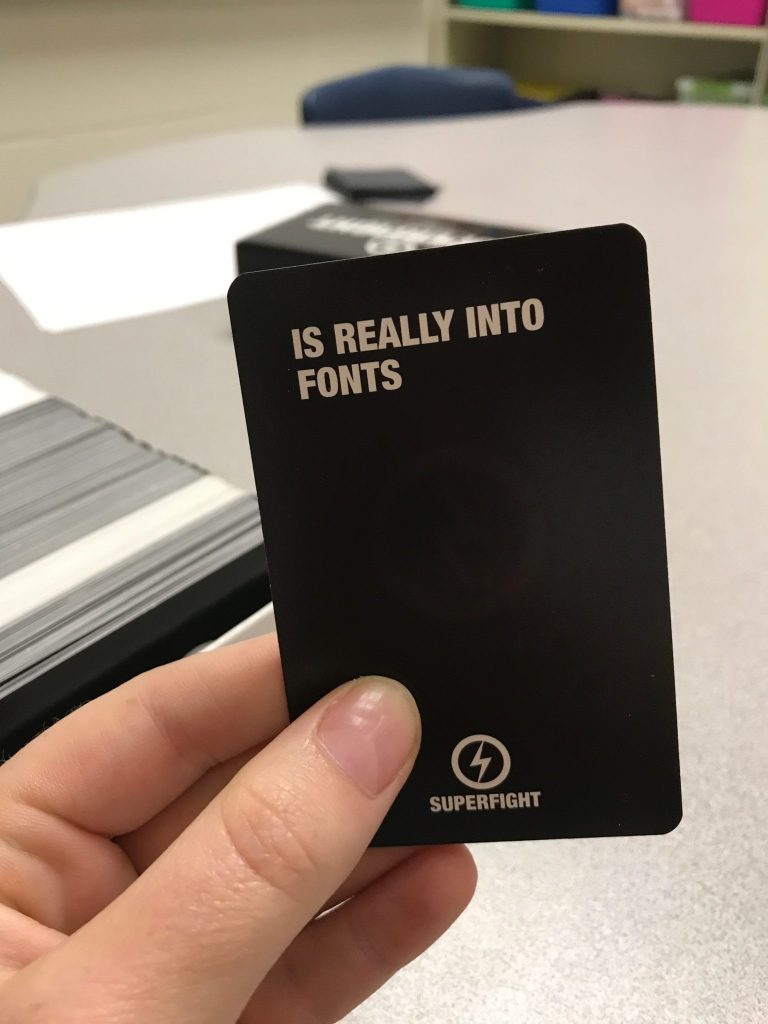