THIS JUST IN: TEXT STRUCTURES!

Moving from Sounds in Isolation to VC and CV Syllables!

Recently, I felt like I had an influx of students who were finally stimulable on some new sounds and needed to move from sounds in isolation to VC and CV syllables! Yay! Except… I suddenly had an incredibly difficult time getting them to produce these sounds when combined with a vowel in syllables. Here’s my tips and tricks for moving from making sounds in isolation to working on the syllable level! My Visual Syllable Web product is shown throughout this blog post. Click here to check the product out in my TpT store! 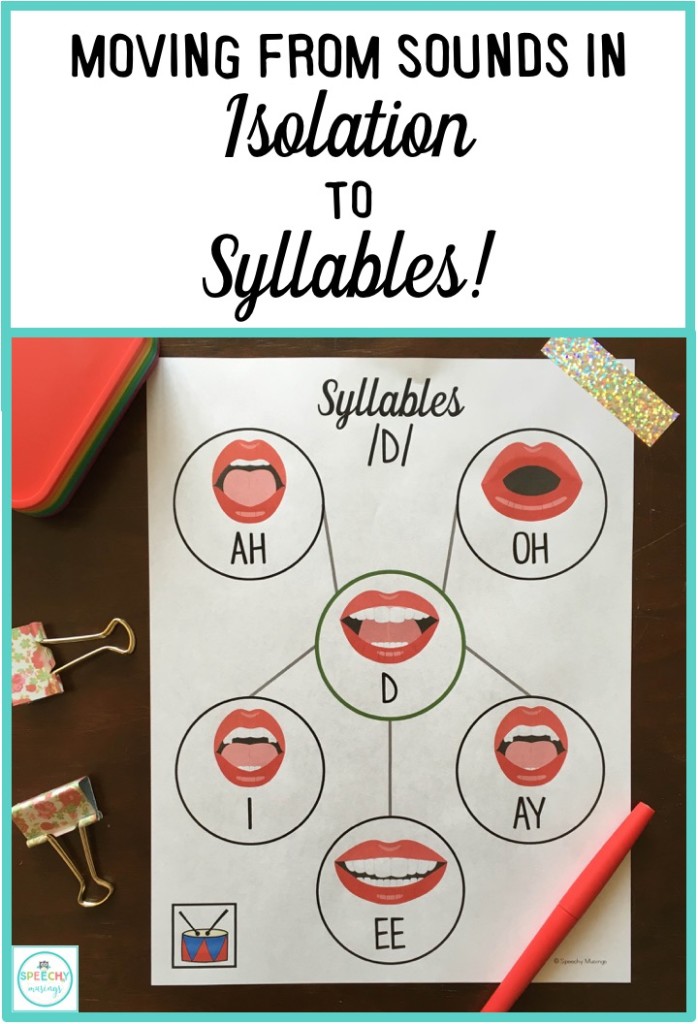 Try the tips below for students stuck at the isolation level! I tend to have the most difficulty moving to syllables with students who demonstrate the phonological process of stopping! Getting these students to produce sounds like /f/ can be incredibly tricky and frustrating!

Step One: Produce the sound in isolation 20-30 times with no errors.

First things first. I do not begin to target syllables until the child can say the sound in isolation 20-30 times in a row with minimal cues and no errors. Can they do this? Good. Time for some syllable work!

“Ah” is always the first vowel I teach because it’s a short vowel and a simple, early developing vowel! This leads to increased early success and less frustration! To begin CV syllables, I touch the inner circle (e.g., /d/), lift up my hand, and touch the vowel circle (e.g., “ah”), making sure to put a significant gap between the two sounds. 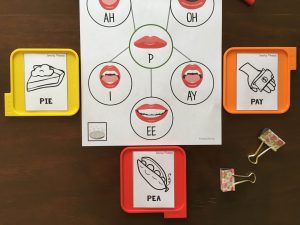 To target this level, I like to have my students sort cards containing the various vowel sounds while practicing (see the picture above). We touch each circle (e.g., “p”—“ay”) and practice the CV syllables segmented apart, sometimes with up to a second gap between the two sounds. The cards shown in this picture are from my Cycles for Phonology Toolkit product.

For this step, we start dragging out fingers between the circles, pausing slightly in the middle. This pause time should be decreasing significant at this level! Note: Some students may need to add an /h/ in between the consonant and vowel. Read the extra tips and tricks section below if you think your student would benefit from this extra support!

Step Six: Produce the sound blended with the vowel “ah”.

Now it’s time to drag your finger from one circle to the other with NO pause time. Smoothly produce the CV word as one unit! With students who have difficulty doing this, I’ve had some success actually having them practice saying the CV word faster so they don’t overthink it. 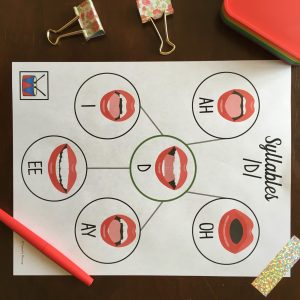 Step Seven: Produce the sound blended with other vowels.

At this point, you should have your students go around the entire circle and practice the sounds in a variety of CV syllables!

Having the same struggle with students on your caseload? Click here to check out my Visual Syllable Webs product in my TpT store! It has helped my students visualize HOW to make the sounds, taking part of the load off and letting them focus where it’s needed! It’s also SUPER fun to put these visuals in dry erase sleeves, to laminate them, or to put them in clear binder sheet covers and use them with dry erase markers and Playdoh! My students love squishing Playdoh on the vowels as they go around the circle!

Need extra tips for those tricky phonological students who demonstrate “stopping”? Try these tips below:

1) Add an /h/ in between the consonant and vowel! Instead of “sun”, try getting them to produce “s-hun” as a middle step.

2) Make sure they can discriminate between the two! I once made this mistake. I worked and worked on syllables with a student who wasn’t discriminating. Lesson learned, I’ll never do that again!! I like to draw a stick figure girl (I’m NOT an artist) who I call “Sue”, and then a pot of “stew”. I have the child point to the word I’m saying. Once they can do this, I have them say it and I point to the word they are saying. They catch on quickly that they need to get rid of that /t/!

3) Emphasizing an open mouth posture for the vowel. Sometimes I like to have them “trap” their tongue as they open their mouth to produce the vowel! They think this is funny and it keeps their tongue low and unable to produce that dreaded /t/!

How do you target VC and CV syllables and words? What sounds do you find the most difficult to get students to add on that vowel? I’d love to hear!

19 Comments on Moving from Sounds in Isolation to VC and CV Syllables!